If you are already familiar with SEP portfolio valuation methods and their inherent shortcomings, you may wish to skip the introductory part (Basics) and jump straight to the part where I discuss specific issues with Qualcomm's conduct in connection with what is arguably the most central standardization process in the field of cellular telecommunications.

The valuation of standard-essential patent (SEP) portfolios is often performed in two steps: first, the value of all SEPs reading on the relevant standard is determined; second, the relative value of a given company's contributions to the standard is measured. In antitrust or contract cases raising FRAND questions, the inquiry may be limited to the second part, as a disproportionately high share of industry-wide royalties collected by one SEP holder can in and of itself serve to establish overcharging and unreasonableness. The latter is a huge problem for Qualcomm in the FTC antitrust case, given that Qualcomm collects approximately 25% of all wireless SEP royalties while being far below that percentage when it comes to its ownership position in wireless SEPs relative to the rest of the industry. Even Ericsson, a company that just suported Qualcomm's now-fully-briefed Ninth Circuit motion to stay the FTC's antitrust remedies, gave testimony in the FTC case that undermines Qualcomm's royalty demands. Ericsson believes to be the leader, and expressed the view that even Nokia's SEP portfolio appears more valuable than Qualcomm's.

For the purpose of determining the relative value of a given company's contributions to a standard, two inherently imperfect indicators are commonly looked at:

Either approach is purely quantitative, not qualitative. But a qualitative analysis is rather costly and time-consuming even with respect to a single patent, making it practically impossible for a large portfolio. And the valuation of change requests can also be difficult, except for requests that are obviously devoid of any technical value, such as reports of mere typos or punctuation mistakes.

The specific problems of the first approach (counting declared-essential patent families) include the well-known problem of massive overdeclaration (driven by both the desire to capture as much of the value of a standard and the potential liability for undeclaring) and that of "opportunistic patenting". To explain the latter, I'll quote an instructive passage from Just-in-time inventions and the development of standards: How firms use opportunistic strategies to obtain standard-essential patents (SEPs), a paper authored by Byeongwoo Kang and Rudi Bekkers on behalf of the Eindhoven Center for Innovation Studies (ECIS) that examined the patenting behavior of participants in standard-setting and identified unusual filing activity around key standard-setting meetings:

"Our data reveals a strong relationship between patent timing and the occurrence of meetings. We observed a remarkable phenomenon that we call 'just-in-time-inventions': the patent intensity of about-to-become claimed essential patents is much higher during or just before these meetings than in other periods. At the same time, they are of considerably lower technical value ('merit'). This suggests that the just-in-time inventions are only beneficial to their owners, whereas for the public they merely invoke unnecessary costs. Finally, we observed that the phenomenon of just-in-time inventions is highly concentrated among specific types of firms, above all vertically integrated ones, and the incumbent champions of the previous technology standard." (emphasis added)

The market-driven and reality-centric solution to the problems I just outlined would be exactly what the FTC proposed in its opening statement in the FTC v. Qualcomm antitrust trial in January: SEP holders like Qualcomm should have to negotiate without undue leverage and, if necessary, prove the value of exemplary patents in court, where the validity and infringement of those patents can be challenged. The FTC didn't say so, but in the industry's opinion Qualcomm's SEPs tend to be very broad, making many of them more susceptible to invalidity than non-infringement contentions. Qualcomm's "No License-No Chips" policy has enabled the San Diego chipmaker to pretty much avoid "the moment of truth," and until earlier this decade, SEP holders drew enormous leverage from the threat of injunctive relief.

But most of the time, portfolio valuation--be it in negotiation or in portfolio-related litigation--is based on those two imperfect methods: DEP (declared-essential patent) counts and CR (change request) counts.

Qualcomm employee Wanshi Chen (the latter being the family name) is the chairman of the 3GPP RAN1 ("R1") working group ("WG"). That WG is "responsible for the specification of the physical layer of the radio [i]nterface" for all the major cellular standards from 3G to 4G (LTE) to 5G. 3GPP means "Third Generation Partnership Project." According to its website,

"The project covers cellular telecommunications network technologies, including radio access, the core transport network, and service capabilities - including work on codecs, security, quality of service - and thus provides complete system specifications. The specifications also provide hooks for non-radio access to the core network, and for interworking with Wi-Fi networks.

"3GPP specifications and studies are contribution-driven, by member companies, in Working Groups and at the Technical Specification Group level."

For a company seeking to exercise a maximum of control over cellular standards development, it's hard, if not impossible, to think of a more influential position than the chairmanship of the RAN1 WG. For an overview of 3GPP WGs I recommend table 1 on page 6 of a document (PDF) available on Ericsson's website. 3GPP members have full access to certain stats on the "3GPP meetings for group R1" webpage. RAN1 WG meetings attract substantially more participants (typically around 450) than meetings held by other WGs.

Unfortunately, Mr. Chen's conduct raises very serious questions. There are extremely strong indications that he has been leveraging this position for the purpose of distorting DEP and CR counts to an extent that other industry players may view as a downright betrayal of the trust that was once placed in him. As in some other patent-related contexts, the proverbial fox appears to have been put in charge of the hen house.

First, there's a conspicuously high number of SEP declarations by Mr. Chen compared to other current and recent 3GPP WG chairmen, as shown by the high-rising bluish line on the following chart based on IPlytics data (click on the image to enlarge; this post continues below the chart): 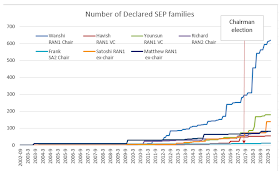 Mr. Chen was a very active patentee even before, but his current position gives him privileged access to information and generally a lot of influence over the standardization process.

The raw data underlying the chart comes from all SEP records where the chairmen or vice chairmen are listed as inventors or co-inventors. IPlytics is a particularly popular tool for researching patent databases. I have recently seen IPlytics-based charts in various articles and tweets by top-notch analysts. So far I have heard only good things about their service.

Mr. Chen was elected RAN1 chair in August of 2017. The chart shows filings by other chairmen and vice chairmen (of RAN1 as well as RAN2 and SA2) who held those positions for a comparable period of time. The chart furthermore shows the numbers for some ex-RAN1 chairmen. Note that Mr. Chen, prior to becoming cahirman, served as vice chairmen form August 2013 to August 2017. The following table shows the periods of chairmanship or vice-chairmanship for the relevant persons (format: MM/YY):

The disproportionately high number of SEP declarations by Mr. Chen strongly suggests that he's taking advantage of his current chairmanship and already did so with respect to his prior vice-chairmanship.

Correction requests are one type of contribution to a standard-setting process. Their primary purpose is to fix issues as early as possible, ideally before any user of standards-compliant devices will be affected. Under 3GPP rules, any formal changes to a specification of an already-adopted standard require the submission of CRs in the sense of correction requests.

It's a well-known fact that some participants in standard-setting like to inflate the number of CRs such as by filing separate CRs even when they could--and conveniently would be--combined. And there can be duplicative or conflicting CRs, which is why it's undoubtedly necessary to consolidate overlapping CRs at the editorial stage. But Mr. Chen imposed new rules that were simply designed to deprive participants of the credit they deserve for valuable contributions, while crediting mostly just the section editors, not the original contributors.

Here's an example of a CR that an editor employed by Motorola Mobility submitted, but a proposal of the verry same substance had previously been rejected only because of the new rules imposed on the RAN1 WG by the Qualcomm-employed chairman (this post continues below the document):

Instead of allowing submitters to use the standard form all the time, Mr. Chen insisted on a limit of one submission per company during a given period, and even required submissions to be made in standard text files (as opposed to using the submission form, as Motorola Mobility did in the above example, which resulted in rejection only because they used the standard form)--and the net effect is basically that the editor will then submit the CR in the name of the editor's company, without any credit to the original submitter.

I've obtained an email sent by Mr. Chen to the entire WG on June 26, 2018 ("Draft agenda for RAN1#94"), in which he reminded everyone of the rule that they should not use the standard CR template and of the one-CR-per-company limit:

Mr. Chen's overly strict rules were criticized by ETSI's Kai-Erik Sunell in an email on August 30, 2018 for being inconsistent with standard 3GPP rules:

"P.S. Frankly speaking, it is difficult for me to understand why you are asked to prepare these corrections on behalf of other companies. 3GPP working methods do not define any 'CR editors' and all 36.xxx specifications are already under change control which means that the rapporteurs of these specifications cannot serve as specification editors anymore. You (and everyone else) are, of course, welcome to serve as informal 'CR editor' if you like to volunteer for something like that but then, please, fill in all the coversheet fields as if the CR captured your own corrections. Please see below an extract from TR 21.900 Technical Specification Group working methods, subclause 4.1.2, https://portal.3gpp.org/desktopmodules/Specifications/SpecificationDetails.aspx?specificationId=555"

Mr. Sunell's title at ETSI is Mobile Competence Center Technical Officer. But ultimately the chairman decides the rules, and apparently the rules haven't really improved since.

"Credit where credit is due" is a good principle. It doesn't make sense that the RAN1 WG would credit only section editors of the specification but not the original submitters.

Of course, it does make sense for Qualcomm's purposes. But will the rest of the industry let one company set the rules for the most important 3GPP WG just because it decreases some other major patent holders' CR percentages? And how about Mr. Chen's disproportionately high number of SEP declarations?

I would encourage the membership of the RAN1 WG to raise the issues internally, and to think about the extent to which Qualcomm's corporate interests as a major patent holder and monetizer are aligned with the interests of the industry at large in encouraging and fairly crediting (with a view to future patent valuation discussions) all contributors.