Continental v. Avanci (Northern Distict of California; Judge Lucy H. Koh; trial date in October 2021) continues to be an extraordinarily interesting FRAND dispute. On Thursday (August 29) I'll attend a hearing that the 21st Civil Chamber of the Munich I Regional Court will hold as a result of Nokia pursuit of an additional anti-antisuit-injunction injunction ("AAII") against Continental AG, the German parent company at the top of the automotive industry supplier's corporate group. The AAII that Nokia obtained last month enjoins Continental Automotive Systems, Inc. ("CAS"; of Auburn Hills, MI), the plaintiff in the U.S. case, once properly served on CAS--which Nokia claims to have occurred already while CAS argues the rigid service requirements of the Hague Convention in conjunction with the rules governing the service of German court injunctions have yet to be fulfilled.

The press office of the Munich court thankfully confirmed to me today that a hearing would be held, and provided the case number 21 O 9512/19, while the case number of the already-ordered injunction against CAS (of which Nokia informed Judge Koh) is 21 O 9333/19. A translation of Nokia's original German motion was attached to Continental's reply (in the form of another letter to Judge Koh). The motion named two respondents (click on the image to enlarge; this post continues below the image): 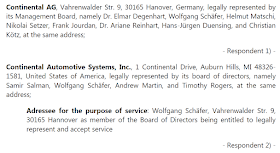 In July, the Munich I Regional Court granted an ex parte (which in Germany means that the other party won't hear anything about the judicial process until a decision comes down) injunction against CAS, but denied the motion with respect to Continental AG. Apparently the Munich I Regional Court then assigned different case numbers to the same preliminary-injunction case: 21 O 9333/19 for the successful part of the motion (the one targeting CAS), and 21 O 9512/19 for the part that was (at least initially) denied. The hearing on Thursday must be held because Nokia didn't accept the denial with respect to the German company.

At the end of or subsequently to the Thursday hearing, the court will decide whether to uphold the denial, in which case Nokia can appeal the matter to the Munich Higher Regional Court, or to reverse the denial and grant the additional preliminary injunction Nokia is seeking against Continental AG, in which case the latter would have the right to appeal the decision to the Munich Higher Regional Court. Either way, I guess this matter will reach the regional appeals court (comparable to a federal judicial circuit in the U.S.) pretty soon.

While the 9333 injunction against CAS came down without a hearing (no matter how unbelievably baffling this may be from an American vantage point), the fact that things didn't go quite so smoothly for Nokia in the 9512 case against Continental AG means that Continental will now finally have the chance to explain to the court why it believes Nokia is not entitled to an AAII. Declarations attached to two recent U.S. filings indicated that Freshfields Bruckhaus Deringer's Dr. Frank-Erich Hufnagel--whom I mentioned here countless times when he was lead counsel for Apple--is Continental AG's counsel in the German Nokia cases. Nokia is suing Daimler in Dusseldorf, Mannheim (where the first of several trials will be held in December as the Mannheim Regional Court's press office just told me), and Munich--and in all those cases, at least some of the accused products are Mercedes models that come with telematics control units supplied by Continental, which according to a U.S. filing has some contractual obligation to indemnify Daimler.

Two things are a mystery to me that I hope I'll better understand by attending the Thursday hearing: