The Munich I Regional Court scheduled a Nokia v. Daimler "double-header" for today: first hearings (several months after which there will be trials followed by decisions) in two of the Finnish company's ten patent infringement cases pending against the German car maker.

The wireless standard-essential patents-in-suit are EP1388234 and the related German patent DE60240446C5 on a "hybrid automatic repeat request (HARQ) scheme with in-sequence deliver of packets" as well as EP2797239 on "a method and a telecommunication device for selecting a number of code channels and an associated spreading factor for a CDMA transmission." On June 5, the same court held a hearing on Nokia's infringement action against Daimler over EP1671505 on a "redundancy strategy selection scheme," and indicated a strong inclination to rule in Nokia's favor, unless things change when the actual trial takes place on February 6, 2020.

A number of suppliers of telematics control units (TCUs) to Daimler are intervening in the infringement case on the automotive company's behalf: Continental (which tried twice, but unsuccessfully so far, to shield Daimler from Nokia's lawsuits by means of a U.S. antisuit injunction), BURY, Bosch, TomTom (world-famous for its navigation systems), and Valeo subsidiary Peiker. Another intervenor, Huawei, makes cellular communications modules that are at the heart of many TCUs made by others; Huawei is also known to offer TCUs, but its counsel mentioned only its connectivity modules today.

Another factor that sets the Chinese mobile technology company apart from the other intervenors is that Huawei is presently obtaining several times more SEPs--and has a far higher share of existing 4G patents--than Nokia. By contrast, the TCU makers intervening in this case largely don't own cellular SEPs. What lends this particular importance is that it shows it's about product-focused innovators (car makers, TCU makers, and the likes of Huawei, Samsung, and LG) versus companies like Nokia and Ericsson, whose current product business is a shadow of its former self, so they increasingly focus on patent monetization.

Something I had heard through the grapevine was finally confirmed today:

Huawei has recently filed an antitrust complaint against Nokia with the Dusseldorf Regional Court, asking the court to order Nokia to make a FRAND licensing offer to Huawei--which (as was also mentioned today) already has a license agreement in place with Nokia for its end products (phones, tablets etc.)--that would result in an exhaustive SEP license covering Huawei's cellular connectivity modules.

Huawei is more likely than not to succeed with its Dusseldorf antitrust action. Presiding Judge Dr. Thomas Kuehnen ("Kühnen" in German), who chairs one of the two patent-specialized "senates" (divisions) of the Dusseldorf Higher Regional Court and is the principal author of the leading German reference work on patent infringement proceedings, published an article this year in the periodical of the German Association for the Protection of Intellectual Property (GRUR). In that article, Judge Dr. Kuehnen explained why implementers at all levels of the supply chain are entitled to an exhaustive FRAND license--and after analyzing various procedural avenues, he concluded that the most practical approach is for the implementer to ask a court--as Huawei is doing now--to obligate the SEP holder to make a FRAND offer. That appears more reasonable than a prayer for relief over a specific set of terms, given that a SEP owner has more information available to make a FRAND offer that complies with the criteria laid out by the Court of Justice of the European Union (CJEU) in Huawei v. ZTE.

Huawei's counsel in the Dusseldorf antitrust action--and representing Huawei to the extent it is an intervenor in Nokia's patent infringement actions--is Preu Bohlig's Professor Christian Donle. Preu Bohlig is one of Germany's oldest IP law boutiques. In the smartphone patent wars that firm successfully defended HTC against a couple of Apple patents. When I heard of Professor Donle's component licensing antitrust action, I invited him to speak at my Brussels conference on November 12 (that's already the week after next), and he thankfully accepted, so he will share a panel with Bristows' Pat Treacy, BakerBotts' Paul Lugard, and Orrick's Jay Jurata. But back to the German cases:

If at the end of Huawei's antitrust action Nokia is required to grant an exhaustive module-level SEP license on FRAND terms (and a real license as opposed to an "extended workbench" type of deal under which the de facto licensee would still be the car maker, with the component supplier merely acting as a licensing agent on the OEM's behalf), Nokia's patent infringement actions against Daimler will, to the extent they involve Daimler cars that come with a then-licensed Huawei component, be not only meritless, but even downright unlawful.

For that reason, Huawei has intervened in the German Nokia v. Daimler cases, requesting that--to the extent Huawei is affected--the cases be severed and stayed. I don't know what percentage of Daimler cars come with a cellular communications module from Huawei--all that has been mentioned so far is that Continental is one of Huawei's various customers among TCU makers, so the percentage could be extremely high.

In today's first hearing, the Munich court (I'll comment separately on their attitude toward antitrust defenses to patent infringement cases) basically said that since Nokia has chosen to sue Daimler, they are for now inclined to be ignorant of the issues raised by Huawei--though we're simply talking about the very (il)legality of what Nokia is doing by refusing to license Huawei while suing its (indirect) customer, Daimler. But it was just a first hearing, so there still is a chance for Huawei to obtain a stay even from the Munich court (which is an outlier court even within Germany in this specific context), or maybe it won't even be necessary in case Nokia fails to prevail on infringement and/or cases get stayed over validity concerns.

I've quickly drawn up a few diagrams to explain the relationship between the different parties and cases. First, here's a hypothetical scenario in which Nokia would--which it probably won't unless forced to--finally honor its FRAND pledge and extend an exhaustive SEP license to Huawei, which would in turn supply TCUs (which it may or may not do, but definitely could do anytime) to Daimler (click on the image to enlarge): 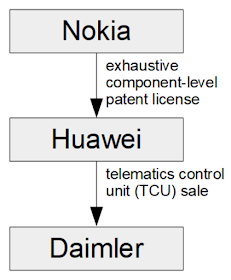 Patent exhaustion works downstream, so the net effect is that Daimler, as the end-product maker, would find itself fully licensed. While an argument was made today about exhaustion under German law requiring that the first licensed sale already involves a product practicing all claim limitations, Nokia did not--as I'm convinced it could not--make an argument that its SEPs claim cars, and Huawei's connectivity modules are full-featured communications devices that--to put it in a slightly oversimplified way--contain all the hardware you find in a phone apart from a screen.

Patent exhaustion works across any number of levels of a supply chain. Here's the second of my three charts--the present commercial reality of Huawei supplying its modules to Continental, which in turn sells a TCU to Daimler, but with the assumption of Nokia finally (which is not the case yet) granting a component-level license to Huawei (click on the image to enlarge): 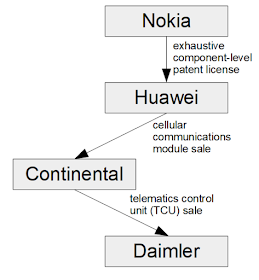 The third and final chart combines the two previously-shown paths down the supply chain with Nokia's ongoing (allegedly unlawful) patent litigation campaign against Daimler and Huawei's Dusseldorf antitrust action against Nokia (click on the image to enlarge; this post continues below the diagram):

Daimler and four other suppliers (Continental, Valeo, BURY, and Gemalto) filed EU antitrust complaints against Nokia earlier this year. Huawei would be in its right to do so, but no such filing is known. What is known by now is the Dusseldorf antitrust case, and just like Huawei v. ZTE started in that same town, where I attended the January 2013 trial that resulted in the referral of various SEP injunction-related questions to the CJEU, Huawei v. Nokia, too, has the potential to make EU antitrust history.