How many times can a patent holder violate EU antitrust law in a single litigation? (Nokia v. Daimler)

Last week the Munich I Regional Court's press office confirmed to me that the Nokia v. Daimler ruling scheduled for this week's Thursday (April 9) had not been postponed. The government of the federal state of Bavaria has not imposed any additional corona-based restrictions since. From what I hear, Presiding Judge Dr. Matthias Zigann is the only member of the court's 7th Civil Chamber to go to the courthouse almost every day, while his side judges are working from home. German courts have sometimes postponed patent rulings on very short notice, but for now the operating assumption is that a decision (which may or may not be a final judgment) will come down on Thursday.

With the automotive industry being hit so hard by the coronavirus crisis, Nokia's pursuit of an injunction--while there are plenty of willing licensees (Daimler and a number of suppliers)--is ethically questionable, though there is a possibility of the injunction not having immediate effect in practical terms. So much for corona and ethics; let's also not talk today about the enormous strength of Daimler's invalidity contention, or about proportionality under Art. 3 IPRED and its political ramifications (a Nokia "win" on Thursday--an injunction against entire cars over one of thousands of tiny features of a single cellular standard--would give the whole German patent reform debate new impetus). Now I'll just focus on the antitrust implications of what might happen.

If Nokia obtained and enforced that injunction, it would likely set a new record in the number of EU antitrust violations a patent holder can commit in connection with a single patent infringement case...

The Court of Justice of the EU made it clear in Huawei v. ZTE that a standard-essential patent (SEP) holder violates Art. 102 TFEU (the abuse-of-dominant-position paragraph of EU law) by refusing to grant a FRAND license to an implementer. A license is a license, and not a "have made" right or a contractual arrangement under which a component maker merely becomes a payment processor for the car maker.

There's a number of implementers in that Nokia v. Daimler case whom Nokia has refused to license, yet it seeks to shut down products containing their components. At a minimum:

The six companies I just listed are intervenors in the Munich case. There's even a seventh intervenor: Renault, which makes a car for Daimler. Presumably Nokia is not unwilling to license Renault as it makes entire cars (even when wearing the hat of a Daimler supplier), so in order to know whether Nokia violated the antitrust laws with respect to Renault, one would need to know the status of licensing negotiations between those two organizations. It's hard to imagine that Nokia would want a lower per-unit royalty from Renault than from Daimler, so there likely is another violation, albeit one that requires a quantitative analysis.

So there are six or seven antitrust violations in the vertical supply chain. But Nokia also appears to be violating EU antitrust law with respect to Daimler even if one ignores the suppliers for a moment as the CJEU held in Huawei v. ZTE that the only scenario in which a SEP holder steers clear of an abuse of a dominant position under Art. 102 TFEU involves the combination of two factors, neither of which is present in this case (click on the image to enlarge; this post continues below the image): 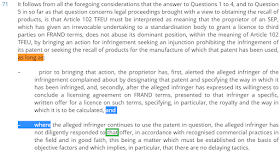 Nokia wants the Munich court to interpret the above paragraph in an absurd way. The top EU court said that a SEP injunction is warranted only after a SEP holder made a FRAND offer while the implementer failed to make a good-faith counteroffer. (A blatantly non-FRAND counterproposal would not suffice to avert an injunction.)

The CJEU gave implementers two chances to avoid being enjoined: they can show that the SEP holder's offer was not FRAND, or they can make a diigent good-faith counteroffer without delaying tactics. They can also meet both criteria at the same time, but they don't have to.

Countless articles have been authored on Huawei v. ZTE. I'll just give one example written by a major U.S. law firm (Morrison & Foerster):

"Only if the SEP holder has followed those steps and the alleged infringer continues to use the SEPs in question, and fails to make a FRAND counter-offer and provide security, may the SEP holder seek an injunction. Otherwise, doing so may constitute an abuse of the SEP holder’s dominant position [...]"

In the February trial, the court showed an inclination to agree with Nokia because "the SEP holder hasn't committed any wrongdoing if its own offer is FRAND." That's wrong, however. The CJEU ruling means that the SEP holder commits a wrongdoing either by not making a FRAND offer or by failing to continue to negotiate despite a diligent, good-faith, timely response by the implementer. One could also simplify it like this: if the SEP holder's offer is not FRAND, that's a violation, end of story; but even if it is, the SEP holder can still violate EU antitrust law by rejecting a FRAND counteroffer.

Nokia seeks to convert the two hurdles for SEP holders into two opportunities for them. In order to achieve this, they effectively suggest that Europe's highest court is inarticulate: in the world according to Nokia, "and" doesn't mean "and" when "or" suits Nokia's agenda, as if the judges in Luxembourg didn't know what "and" means.

The "and" in question has a blue background in the screenshot further above. Three L's way against Nokia's attempt to turn the CJEU ruling on its head: language, logic, and layout.

"And" means "both of." So much for the language.

"And" is a logical conjunction.

From a linguistic and logical point of view, it's made even clearer by the fact that the second one of the two parts makes reference to the first by saying "that offer" (I put a green rectangle around the relevant occurrence of "that" in the screenshot). "[T]hat offer" is the SEP holder's initial offer, and interpreting the second part as if it (more precisely, the implementer's failure to fulfill its obligations under it) could independently legalize a SEP injunction simply pulls the rug (the precondition of there already being a FRAND offer on the table) from under its feet.

Finally, the text layout would make the logical conjunction clear in its own right. In the screenshot, I applied an orange background color to the words "as long as," and a blue one to "where" a few lines below. Nokia's suggestion that the SEP holder could meet either the first or the second criterion is also nonsensical because "as long as" is before a colon followed by two bullet points, while "where" comes after the second of the two bullet points. If the two bullet points were alternative requirements for Nokia to satisfy (as they aren't anyway, for the reasons explained before), "as long as" would have to come after the first bullet point (just to the left of "prior to bringing that action"). But in the CJEU's ruling, "as long as" simply ranks higher than "where," so the two just can't be considered interchangeable.

Seeking an injunction against a willing SEP licensee constitutes only one antitrust violation vis-à-vis a given party. But here, Nokia is practically doing so against seven or eight parties. And against one of them--Daimler--Nokia is apparently violating Huawei v. ZTE even twice as it (i) seeks an injunction despite Daimler having given a diligent, good-faith, and timely response, while (ii) Nokia is demanding a fairly high multiple of the per-unit royalty from Daimler that it gets from major smartphone makers. That higher per-unit fee is even more discriminatory when considering that people use smartphone connections for far more hours per day than their cars are online (while one must not actively use a smartphone while driving, virtually no one turns it off either, so the period during which a smartphone has a cellular connection is pretty much a true superset of the hours when the car is connected).

Anything could happen on Thursday. In some other courts I'd offer a 90% prediction that the case would be stayed over serious doubts concerning the validity of the patent-in-suit. In that regard, Munich is "special" because the court rarely stays cases. But Munich, too, is part of the EU.