Further below you can find previously not published data showing what a huge problem with the expiration of 5G-essential patents Nokia faces in the coming years. If you wish to skip right to that passage, please click here.

Among the three most powerful members of the current European Commission, EU commissioner Thierry Breton (Twitter profile) is "Monsieur Non" with respect to enforcing EU competition law against standard-essential patent (SEP) abuser Nokia. He and his cabinet are the ones who adamantly oppose what would not only be right from an antitrust perspective but also benefit Europe's economy at large, from small Internet of Things startups to car makers.

For the EU, it should be a no-brainer to require SEP holders to extend exhaustive component-level SEP licenses to component makers. The enforcement priorities of the Commission's Directorate-General for Competition (DG COMP) appear to pursue only one principle: protectionism. By letting Nokia and its partners in crime (the Avanci gang) get away with what they're doing (they've already obtained two Germany-wide patent injunctions against Daimler and are seeking many more), while coming up with novel and at times even absurd theories of harm concerning American companies, the Commission is systematically destroying the reputation as a competition regulator that it worked so hard to build in earlier decades. But Mr. Breton doesn't care.

Atypically for a Frenchman, he doesn't even give a damn about his own country's economic interests. France holds few cellular SEPs, but has a sizable automotive industry, which may so far not have been sued by the Avanci gang, yet will inevitably face the same shakedown as German and American car makers. There is no such thing as a free lunch--much to the contrary, whatever royalties Nokia and its allies extract from foreign companies will be used as "comparable license agreements" in any license fee dispute with their French counterparts. There are purely tactical reasons for which it hasn't happened yet. Back royalties will be huge.

Mr. Breton's negative influence extends far beyond his informal veto of any DG COMP investigation of Nokia's refusal to live up to its FRAND licensing promise. You can set your watch by him: once the Commission has to provide input to the Court of Justice of the EU on component-level licensing, Mr. Breton is going to have no more regard (i.e., zero) for the Commission's Legal Services than he has for DG COMP's regulatory responsibility. And the Commission's IP policy unit is part of DG GROW, formerly (and less euphemistically) called the Directorate-General for the Internal Market ("growth" is something at which the EU has failed miserably, with no chance that it would ever close the digital-economy gap). The Commission's SEP Expert Group is coordinated by that IP policy unit, which is ultimately under Mr. Breton's control.

What I heard about Mr. Breton acting like a Nokia/Ericsson lobbyist, coupled with the fact that the former CEO of France Telecom may have longstanding contacts with Nokia and Ericsson, made me wonder why a commissioner would do that. The only plausible explanation is that he actually--and very much mistakenly--believes he's doing the right thing for Europe's future. In a recent YouTube interview with Politico EU, he credibly comes across as someone driven by a desire to strengthen Europe in political and economic terms (this post continues below the video):

At minute 39, however, he spouts nonsense--and repeats himself multiple times insisting that it's "a fact":

"We have been always leading in mobile communication, including in 5G. Today, Europe is the leading continent in 5G: the most patents and contracts. We are happy to have two European global companies [Nokia and Ericsson, he means] and these two companies are having [sic] more patents than others. [...] but this is a fact [...] this is just a fact [...] facts are extremely important--not just rhetoric--it's a fact."

No, Mr. Breton. You--and probably your advisers first--have to get your facts right. You're entitled to your opinion, and to your agenda, but not to your own facts. What you say about Europe leading in 5G patents is simply the opposite of a fact. It's completely untrue, and if you check the facts, chances are no one will be more embarrassed than you. So let me give you the real facts since your advisers have either failed to do so or you didn't listen to them because you're predisposed toward buying whatever Nokia's and Ericsson's lobbyists tell you.

There's not even one serious SEP study in the whole wide world that sees Europe ahead in 5G SEPs. All the independent studies see Europe behind, and losing ground.

There's only one plausible--and regrettably poisoned--source for Mr. Breton's misinformation, and that's a "study" that the very law firm representing Nokia in the automotive SEP licensing talks (including the mediation that failed earlier this year) put together. Ericsson published its key findings. Interestingly, the study is not even consistent with what the author of that Ericsson blog post, Mrs. Peterson, testified in FTC v. Qualcomm when she was trying to devalue Qualcomm's portfolio.

[Update on 09/30/2020] Bird & Bird has meanwhile stated on LinkedIn that there's a more recent version of the study, which in fact has Asia ahead of Europe, confirming my point and suggesting that Mr. Breton relies not only on incorrect, but even outdated information. [/Update]

The "methodology" of that "study" is vaguely described as applying Justice Birss's Unwired Planet v. Huawei "filtering" approach (paragraphs 325 et seq. of the ruling, but that one was actually derived from what expert witnesses paid by the litigants told the court. What the ruling indicates is that the methodology involved essentiality determinations based on a sample of patents. If Nokia's own lawyers performed that kind of analysis here, I wouldn't recommend anybody--and especially not an EU commissioner--to take the result at face value.

That "study" was published in response to other statistics based on declarations (such as IPlytics) and/or contributions to the standardization process. Those other approaches didn't lead to the kind of result Nokia and Ericsson would have liked, and while one can indeed level criticism at simple counts, they're at least performed by independent entities, not Nokia's own lawyers.

If, however, the name of the game is to take a critical perspective and conduct an essentiality analysis, Amplified and GreyB did just that, did it independently, and did a great job (click on the image to enlarge; this post continues below the image): 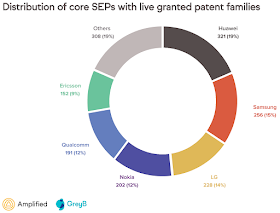 In the Amplified/GreyB study, Nokia's essentiality rate (i.e., the percentage of declared SEPs that passed a technical plausibility test) was just average, and Ericsson's was rather poor.

Many of Nokia's so-called 5G SEPs are actually patents that were already declared essential to earlier standards. The age of Nokia's portfolio is a huge issue, and I wanted to shed some light on it here. Given that the Amplified/GreyB study is currently the best 5G SEP portfolio analysis out there, I contacted them and asked them for data on how many of the "5G Core SEPs" (i.e., patent families (note they correctly focus on patent families as opposed to separately counting patents on the same invention filed in parallel in multiple jurisdictions) that were declared essential to 5G and passed their plausibility test) will expire in the years ahead. Thankfully, Amplified/GreyB provided the following table showing the number of patent families to expire by the end of a given year as well as subtotal for the years 2020-2023 (click on the image to enlarge; this post continues below the image):

Based on the numbers in the above table, I've done some further calculation that shows the cumulative percentage of the currently-live 5G SEP families (only the ones that passed the Amplified/GreyB plausibility test) that will have expired by then (click on the image to enlarge; this post continues below the image): 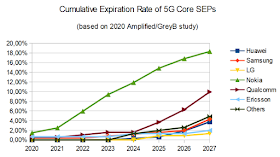 The dark green line at the top shows that a far higher percentage of Nokia's currently-live 5G SEP families will expire than of any other major SEP holder. In fact, over the course of the next five years, Nokia alone will lose more 5G SEP families as a result of expiration than the rest of the industry combined.

Amplified and GreyB have nothing to do with the content of this blog post other than that I asked them for the percentages of patent families set to expire in certain years. I very much appreciate the fact that they answered my question, and as I expected, the numbers are telling.

By protecting Nokia, Mr. Breton is placing a postfactual bet on a dying company's shrinking portfolio, coming from an incorrect assumption of Europe's competitiveness in that field. The alternative for him would be to show more appreciation for the innovative potential of European IoT startups and the automotive industry, including the suppliers of digital components. If he did that, his numbers might even work out.