Two weeks after Fortnite maker Epic Games brought a motion for judgment on the pleadings against some of Apple's counterclaims (particularly the ones that might give rise to punitive damages), Apple filed its opposition brief on Friday evening Pacific Time (this post continues below the document):

One of the disputed theories is called conversion, which Apple describes as follows:

"Stated simply, Epic is stealing money from Apple. Theft is a crime, and 'conversion' is its civil-law analogue. The victim of theft has always had the right to sue for conversion to get its property back from the thief—irrespective of the technical means by which the conversion is accomplished. If, for example, Epic sent an agent into Apple Park and stole cash from a vault, a conversion claim could properly be pleaded. If Epic hacked an Apple bank account and stole cash electronically, a conversion claim could properly be pleaded. And if Epic bypassed IAP to funnel funds that include Apple's revenues and commissions into Epic's coffers, a conversion claim can be—and has been—properly pleaded." (emphases added)

In yesterday's filing, Apple says it has the right to sue Epic not only for breach of contract but also for tort, given that Epic would face tort liability "if [t]c had never executed the contracts with Apple and had instead found another way to smuggle Fortnite and its 'hotfix' payment mechanism into the App Store." Apple argues that a company protecting itself against such behavior through contracts must not be in a weaker legal position than one that doesn't. What Apple does clarify is that it won't seek "multiplicative recovery" if the same conduct on Epic's part constituted both a breach of an agreement and fraud. In other words, Apple would then content itself with only the greater of the two alternative amounts.

It appears that the "hotfix" was just a simple data point on Epic's servers--not program code, but merely a trigger. When the iOS version of Fortnite checked on that data point, it offered an alternative payment mechanism to end users in circumvention of Apple's in-app payment rules.

After the "hotfix" that Apple says became Epic's hot mess, Fortnite was removed from the App Store. That means it cannot be downloaded to iOS devices right now, and Epic has already failed twice (with a motion for a temporary restraining order as well as a motion for a preliminary injunction) to get a court to force Apple to tolerate an iOS version of Fortnite that bypasses Apple's in-app payment system.

At least so far, Apple has not removed Fortnite from the devices of iOS users who downloaded it prior to its removal from the App Store. Those users can't get updates, and they wouldn't be able to reinstall Fortnite if they (the users) deleted it. But so far the battle royale game has remained on tens of millions of devices.

What I didn't know (because I didn't have Fortnite on any of my iOS devices when it was removed from the App Store) is that Epic continues to offer in-app purchases that bypass Apple's system. Yesterday's filing says the following:

"{...] Epic's refusal to deactivate its hotfix makes this a continuing tort, as Epic's bank accounts continue to grow daily with additional stolen amounts. While Epic has repudiated its contractual obligations through its lawsuit, and its claims will be tested in time, Epic's continued siphoning of sales from IAP is just theft, plain and simple."

"[...] Epic to this day is stealing definite, ascertainable sums of money from Apple, and the tort of conversion provides a civil remedy for such conduct."

"The amount stolen by Epic from Apple can be fixed with certainty; the fact that this amount increases with every day that Epic continues its wrongdoing does not relieve Epic of tort liability."

Epic had various reasons for sneaking that alternative payment system past Apple's review process. From an antitrust angle, Epic appears to believe that any purchase made by a user of Fortnite on iOS that bypasses Apple's payment system can later serve as proof that there is "demand" for such alternatives. Epic also wants to make the case for how such alternatives save end users money.

After Fortnite was removed from the App Store, Epic could simply have deactivated that trigger it calls a "hotfix" and resubmitted a version of Fortnite to Apple's app review that would have complied with Apple's rules. But Epic doesn't want to de-escalate. Instead, it takes the position that it's simply allowed to breach an agreement with Apple that Epic claims to be a violation of the antitrust laws and, therefore, illegal and unenforceable.

From the get-go, Epic has viewed its dispute with Apple as a combination of litigation and public relations. When Epic CEO Tim Sweeney declared war on Apple by way of a 2 AM email, he announced that the two companies would be in conflict "on a multitude of fronts – creative, technical, business, and legal" (and possibly "for many years"). By continuing to generate in-app purchasing revenues on iOS without Apple getting its contractual share, Epic demonstrates its determination to fight. But it can't necessarily count on support from the courts.

On Monday, Judge Yvonne Gonzalez Rogers of the United States District Court for the Northern District of California will hold a case management conference relating to multiple App Store antitrust cases pending before her. 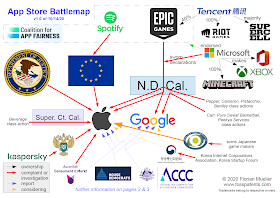