Two more weeks until the single most important court ruling in the (short) history of the IoT industry: component-level SEP licensing

Originally, the Dusseldorf Regional Court had scheduled its Nokia v. Daimler ruling (with implications for a spin-off from that case, the Huawei v. Nokia case that resulted from the severance of Huawei's third-party counterclaims) for today. But for court-internal reasons, the ruling date has been pushed back by two weeks.

The Internet of Things industry should pay close attention on November 26, 2020. No judicial decision to date has been of comparable importance to the "I" in "IoT."

There's no IoT without an Internet connection. Apart from a small subset of IoT devices that will be just fine with a BlueTooth connection, some kind of WiFi or cellular (such as 4G/LTE) connectivity is a hard requirement. That's where you have to deal with thousands of allegedly standard-essential patents (SEPs)--a challenge even for large and sophisticated organizations, and nothing short of a nightmare for small and medium-sized IoT companies, especially startups.

At a Brussels conference I organized about a year ago, young and innovative IoT companies like AirTies (from Turkey) and Kamstrup (from Denmark) discussed the problem of SEP licensing from their perspective. The problem they face is that SEP holders (particularly trolls, of which are many--and they get fed with patents by the likes of Nokia and Ericsson) are at least as unwilling to extend exhaustive component-level SEP licenses to the IoT industry's suppliers as they are in the automotive context. Their calculus is always that they can maximize their leverage by going after end-product makers, such as companies that produce smart meters (such as Kamstrup). They make outrageous demands, sometimes listing dozens or even hundreds of patents that one can relatively easily identify as being technologically unrelated to the standard they claim they're essential to.

A defendant like Daimler can afford to be defended by a world-class litigation like Quinn Emanuel--and nevertheless got hit by four SEP injunctions just over these past few months. The average IoT company can only dream of hiring QE, and will find it hard to pay even for the initial analysis (not even in-depth!) of claim charts. Actually, they might not even be provided with claim charts as the Federal Court of Justice of Germany abolished that requirement this year in Sisvel v. Haier (contrary to how the Court of Justice of the EU's Huawei v. ZTE guidance should be applied)...

It's simply a fact that IoT startups can't handle SEP licensing themselves, so their suppliers (such as baseband chipset makers) must do the job and then provide a fully-licensed product. That's what patent exhaustion is all about.

The Dusseldorf court's widely expected referral to the CJEU of key legal questions related to component-level SEP licensing can be a game changer to the benefit of the IoT industry. It doesn't matter that Nokia v. Daimler is an automotive case. While it's not incorrect to refer to that kind of dispute as a "connected vehicle case," Nokia's SEPs aren't specific to self-driving cars or collision prevention. It's basic wireless communications technology. The legal questions are the same, but the problem is an even more pressing one for the IoT sector.

I've quickly drawn up a couple of charts to explain how the IoT industry's SEP licensing problems relate to those of the automotive sector. This is particularly important with a view to a Berlin roundtable next week to discuss a Qualcomm proposal that I believe neither the European Commission nor the German government can support without throwing IoT under the bus.

In a nutshell, Qualcomm, Nokia, and other SEP holders pursuing similar licensing tactics would still prefer to license their patents only at the end-product level (i.e., to Daimler, Volkswagen etc.), but not least with a view to the Dusseldorf court's upcoming referral to the CJEU they're now talking about tier 1: the automotive industry's direct suppliers. Telematics control units (TCUs) are tier 1 products from the automotive industry's perspective (the higher the number, the higher up in the supply chain). TCUs contain network access devices (NADs; tier 2), and those rely on a baseband chipset (tier 3). Here's the "nesting" of one product inside another as a simple chart (click on the image to enlarge; thist post continues below the image): 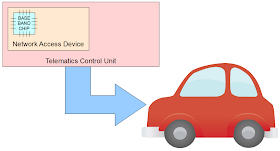 Baseband chipsets are relevant to the automotive industry just like they are to IoT products with cellular connectivity. At the level of the NAD (automotive tier 2), however, there's already some differentiation: NADs designed to be used in cars come with certain automotive-specific functionality that no IoT product needs. And TCUs are definitely just an automotive thing. It wouldn't be an economical choice to incorporate TCUs into non-automotive IoT products, and it would be a waste of space (on top of money).

This second chart shows three scenarios: two types of IoT products (with and without NADs, but again, NADs for IoT are not the same as NADs for cars), and the automotive supply chain (click on the image to enlarge; this post continues below the image): 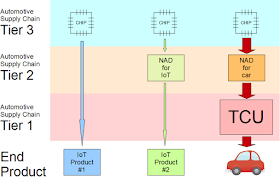 For the reasons explained further above, end-product licensing is absolutely not a viable option for small and medium-sized IoT companies. And as the above chart shows, TCU-level licensing (tier 1) as proposed by Nokia this fall and, as I mentioned, by Qualcomm wouldn't work either. At a minimum, licenses would have to be available at the NAD level, and then the royalty would have to be commensurate with what a patented invention adds to the commercial value of that component as opposed to that of the end product.

If the top EU court holds that all levels of the supply chain are entitled to an exhaustive component-level license on FRAND terms, the problem will be solved for IoT, at least in the European market with potential repercussions around the globe.