About a year ago, the two major app stores decided to bar tens of millions of app developers from publishing COVID-related apps, no matter how useful those might be, unless they enter into public-private partnerships or co-publish their apps with certain types of entities. Both Apple and Google claimed that this was done in the interest of public safety.

A couple of weeks ago I announced my own app development company's antitrust complaints in multiple jurisdictions over those rules and their arbitrary application. While apps that could make (or early on could have made) a positive contribution to the fight against SARS-CoV-2 get rejected (which is why the team that developed an app named Coronavirus Reporter is suing Apple in the District of New Hampshire), apps that let players act as bioterrorists (telling them to "infect the world") or apps and books promoting bogus medicine (Homeopathy for Epidemics) are allowed. Better rules are badly needed.

Today I learned that Google has reached a new level of self-contradiction concerning COVID apps. On the Google Play Store one can download the "official" app of #WirMachenAuf, a group of German small business owners promoting and coordinating the flagrant violation of national and regional coronavirus prevention rules (click on the image to enlarge; this post continues below the screenshot): 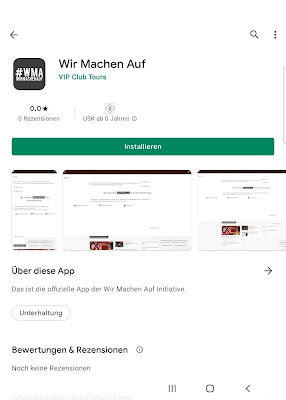 Whoever reviewed this app on Google's side could simply have googled what WirMachenAuf is all about (to provide just two of countless articles indexed by Google's search engine: BusinessInsider Germany, state-owned TV news program). It's a group of small business owners trying to mobilize their colleagues to reopen restaurants and stores in violation of governmental coronavirus prevention measures.

So far, that initiative doesn't have much traction. Only a few dozen businesses participated last month. But its lack of success doesn't make that campaign acceptable or lawful, and the longer the current lockdown stays in force (for certain types of businesses), the greater the risk that more business owners join such a movement. Also, the German #WirMachenAuf initiative has spawned similar ones in other European countries, and it appears that some cafés in Italy recently opened in flagrant violation of lockdown rules.

The app doesn't explicitly mention COVID or corona(virus), but the positions and objectives of that initiative are known and easily researched. There's a screen on which the app explains what it's all about, referring to governmental measures taken since 2020 and explicitly declaring the intent not to comply with them anymore (click on the image to enlarge; this post continues below the screenshot): 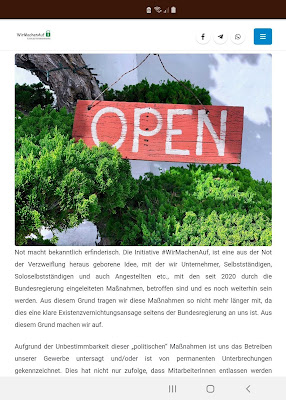 "Google takes this responsibility very seriously, and in the interest of public safety, information integrity and privacy, only specific COVID-19 apps that meet the requirements below will be allowed on the Google Play Store."

There you have it.

In August Epic Games CEO Tim Sweeney criticized (on Twitter) "the broken state of mobile platforms in 2020." Whether one fully agrees with him or not, Google's approval of the "official" app of a group inducing small business owners to break the law and open in the middle of a lockdown does show that there are serious issues--which must be addressed, one way or the other.

Google's use of its monopoly power in the COVID context is also being challenged in court. On January 20, 2021, the Munich I Regional Court issued a press release on a preliminary injunction hearing held by the court's 37th Civil Chamber (patent cases are heard by the 7th and 21th Civil Chambers, just to avoid any confusion here) in a case in which a WebMD-like website named NetDoktor.de (recently acquired by a large European publishing group named Hubert Burda Media) alleges an antitrust violation by Google's prominent display of a government-owned health information website (gesund.bund.de) when users search for certain COVID-related terms, thereby disadvantaging private-sector health portals like NetDoktor.

The problem on Android is even worse, as Google just doesn't allow anyone except governmental and certain government-approved entities to use COVID-related keywords anywhere in their metadata (as opposed to merely giving preferential treatment to some apps). Still, I can relate to NetDoktor's concerns. I don't know what the lower Munich court's inclination is, but no matter what the outcome will be, this case is sure to be appealed by the losing party to the Munich Higher Regional Court--and not only will there be a final decision on the preliminary injunction request but also a main proceeding and, therefore, a full trial.

The Burda publishing group raises a combination of antitrust and freedom-of-press concerns, such as in this opinion piece, according to which lawyers for the federal minister of health told the court that granting the injunction would undermine the minister's authority as the federal government's public face in the fight against COVID (which is ridiculous for a variety of reasons). One of the Burda group's C-level execs, Philipp Welte, gave a podcast interview in which he explained that for websites like NetDoktor "Google['s search engine] is the market." I understand that the decision, which was originally scheduled for last Friday, has been pushed back to Wednesday (February 10, 2021).

As I already explained last month, I don't have issues with Apple and Google at this point apart from their COVID app rules (and with Google I've disagreed on API copyrights for more than ten years). I hope the problem can be solved. With respect to Android apps relating to COVID, Google appears to be pretty specific about what YouTubers are not allowed to say (COVID-19 Medical Misinformation Policy). Both major app stores should improve their COVID app rules, and they should apply them reasonably and consistently, in which case Google would never again approve apps seeking to dissuade small business owners from complying with regional lockdowns.