For only the second time in more than a year, I went to the Landgericht München I (Munich I Regional Court) today. The case itself--Solas OLED v. Samsung Electronics (case no. 44 O 9702/21)--lacks everything that a patent infringement action needs in order to be taken seriously. If it raises any interesting question at all, it's whether Google is supporting Samsung against a case that targets the Android operating system. I'll get to that later. I'd have attended that hearing even if the case had been outside of my industry focus. All I wanted to see the court's third patent litigation division's premiere session. Icing on the cake: I got to see a new courtroom, too.

Here's a picture of the Munich I Regional Court's 44th Civil Chamber that I took with my limited talent and a Google Pixel phone (click on the image to enlarge): 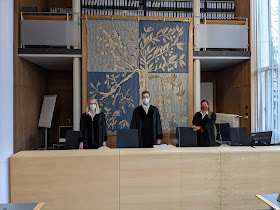 In the middle, you see Presiding Judge Dr. Georg Werner. To his right (from the beholder's angle), his deputy, Judge Dr. Anne-Kristin Fricke (who brings not only patent but also significant competition law expertise to the table and is the rapporteur on today's case). To his left, Judge Dr. Franziska Greiner-Wittner.

Don't infer from the medieval-looking banner behind the judges that this courtroom (Lenbachplatz building, room 101) is old-fashioned. It used to be a library, but has recently been transfomed into a courtroom--and with a view to videoconferencing capabilities, it presumably has better technical equipment than any other courtroom in Munich.

In recent years, the Munich court's patent infringement panels have clearly demonstrated thought leadership, arguably to a greater extent than any other trial court in the world:

It is no secret in the local patent law community that Judge Dr. Werner, who is also very well-liked in academia, made important contributions to the development of patent jurisprudence in Munich. Consistency is assured: the court's three patent litigation divisions (the 7th, 21st, and now also 44th civil chambers) will be perfectly synced. There was a time when Munich plaintiffs viewed the 7th Civil Chamber the "grand prize" in the lottery that is the assignment of new cases to a division. The only way to engage in "judge-shopping" was to amend existing complaints by throwing in new patents, which claims were immediately severed but remained with the same division. That's a thing of the past. If you're looking to assert patents in Munich, your case will be put on a very similar timeline and your chances of success will be at the same level no matter which of the three divisions your complaint gets assigned to.

Before he became the 44th Civil Chamber's Presiding Judge, Judge Dr. Werner left the 7th Civil Chamber (where he was Judge Dr. Matthias Zigann's deputy) earlier this year and took over a non-patent division that nevertheless heard cases with an IP element. He's since presided over a number of hearings and trials, so it came as no surprise that his moderation of today's session looked like he'd been doing this for many years.

Next year we'll probably start to hear about landmark decisions by the 44th Civil Chamber, but the case they heard today is just too weak to lend itself to anything spectacular.

Ireland-based patent licensing firm Solas OLED is suing Samsung over a number of patents in different venues, and a Texas jury has already awarded it more than $60 million in patent infringement damages.

There are cases in which NPEs (or the ones who sold them patents) came up with a brilliant idea before anyone else patented it. But there are also cases in which someone just tries to obtain a patent on a technique that is not innovative in any respect, and the plan is just to capitalize on legal uncertainty by suing those who make actual products (like Samsung), hoping that a court will be gaslighted into an overbroad claim construction resulting in a lucky punch for some troll. And Samsung has a hard-earned reputation for declining to feed the trolls.

The German Patent and Trademark Office can be anyhing but proud of having issued German patent DE102009019910 on gesture recognition. The court phrased it diplomatically today, but Judge Dr. Werner noted their real struggle to identify some claimed inventive substance. Let's keep in mind that when that patent was filed in 2009, capacitive multitouch touchscreens were already in widespread use: the first iPhone was launched in 2007, and the first Android devices not much later. This doesn't mean that there wouldn't be any more room for multitouch patents, or even gesture recognition patents, but a claimed invention has to make a technical contribution to the state of the art as it solves a technical problem with technical means. This particular Solas patent makes no technical contribution, and here's why:

The closest thing to a technical contribution that the court--only hesitantly, for good reason--identified is found in paragraph 15 of the specification of the patent. The argument for patentability comes down to saying that a particular way to structure computer program code is more efficient to develop and easier to test than another. However, this is not a software patent of the kind that is considered a computer-implemented invention, which solves a technical problem with technical means involving a computer program. What this is all about is a software architecture, if not a coding style.

The patent fails to provide any efficiency gains at the machine level. If it has any effect, it has to do with how to organize the work that computer programmers perform. It's astonishing that some German patent examiner granted that patent application in clear contravention of § 1 PatG (§1 Patent Act), which is the German implementation of Art. 52 of the European Patent Convention (EPC). There is no technical effect here: all that the patent specification itself claims is that it#s "hard to reliably and efficiently add code to identify a new gesture in an existing code segment, and that testing such code presented difficulties.

Reliability and efficiency can justify the patent-eligibility of a software-related invention under European case law. But that applies only if the invention is technically superior and, therefore, more reliable and more efficient. In this case, there's nothing that would stop programmers from developing equally (if not more) reliable and efficient program code for the purpose of the identification of new gestures whether or not they choose the code structure claimed by the patent. Sure, some programming styles are more error-prone than others, but that's not capable of establishing technicity. Technicity means that you develop a program, execute it, and the execution of the code then reliably delivers a tangible benefit. Otherwise the authors of books like Clean Code could also have filed for patents before publishing their works...

Any machine-learning algorithm would make it even less time-consuming to teach a system to recognize new gestures. The patent in question does not contain a specific solution to the problem of recognizing new gestures: the whole argument is that if you modularize (or one might also say "partition") the code and have one Turing machine (state machine) for the identification of single-touch gestures and a second that interprets a timestamped sequence of single-touch gestures as multi-touch gestures, you'll find it easier to write the additional program code needed to recognize new gestures. But someone still has to write that code. That someone is a human being. And if you let a very good programmer A write such code under a different software architecture, the result may be even more reliable and the development process even more efficient than if an average programmer B was assigned to the task but adopted this particular architecture.

The human factor here distinguishes the claimed invention in question from cases in which the EPO's boards of appeal and national courts have deemed software patents valid. This here is not a computer-implemented invention, but purely about how human beings organize their work (i.e., the code they write). The EPO itself has always made it clear, including in debates during the European legislative process on CIIs in the 2000s, that program code is not patent-eligible due to the exclusion of "computer programs as such" under the EPC. Firstly identifying single-touch gestures and then putting those intermediate results together and perform some further analysis is not just trivial: it simply fails to meet the European technicity requirement.

The way such patents are usually shot down in Europe is, however, not on the basis of Art. 52 (or its equivalent in Germany, § 1 Patent Act). Normally, all non-technical claim limitations are ignored in the novelty analysis, and what is not novel cannot contribute to an inventive step either. In this case, I don't think the piecemeal approach is appropriate, and prior art is not needed: the patent itself doesn't claim any technical efficiency or reliability gain; it merely claims that human beings who adopt the structural recommendations of the patent are more likely to arrive at a good result.

It speaks volumes that the closest thing to a technical contribution identified by the court is totally detached from the claims, which do not in any way address the question of how to support new multitouch gestures.

Other than a mention of four invalidity contentions brought by Samsung, validity was not discussed today, however. First hearings in Munich--unless infringement is conceded--do not address validity; it's too early for that. The focus was on the infringement analysis. Samsung disputes Solas OLED's allegations of infringement, arguing that Android's MotionEvent object does not have the two separate types of state machines described in the patent.

Samsung's lawyers--Allen & Overy patent litigators Dr. Jan Ebersohl and Denise Benz, and Zimmermann & Partner patent attorney Dr. Joel Naegerl ("Nägerl" in German)--have jointly achieved that the court is, for now, unconvinced of Solas OLED's case. In the U.S., the court would construe the patent, but would then let a jury decide the factual questions. In Germany, courts resolve these cases based on the pleadings, and Samsung's non-infringement argument may be sufficiently substantiated that Solas OLED will not overcome that hurdle.

It also became known today that Samsung has also, out of an abundance of caution, raised a proportionality-based affirmative defense to Solas OLED's prayer for injunctive relief. However, not only does it appear unlikely that the court will reach that question (as the patent may be neither infringed nor valid), but this year's patent "reform" bill falls into the "plus ça change" category anyway. Of course, defendants like Samsung cannot leave that stone unturned. It's just not going to help unless a plaintiff makes a huge mistake.

What Solas OLED is doing in this litigation gives NPE litigation a bad name. They're trying to monetize the mistake that the German Patent & Trademark Office made when it granted this patent. If they won, other Android device makers and, therefore, Google itself would have to be concerned. I didn't see any Google representative in the room, nor did Google appear to formally intervene. Maybe Google doesn't support device makers the way it should--or neither Google nor Samsung take this case seriously, which I couldn't blame them for.

I'm pretty sure that the 44th Civil Chamber's first patent injunction will come down next year (anything else would be a statistical anomaly), but in a rather different case. Despite today's case being a stupid one over a bad patent, the 44th is off to a good start.