Which part of 'external' does a @reckless journalist fail to understand? Disinformation about Epic Games v. Apple injunction doesn't stop

I wouldn't have thought that after yesterday's post (FOSS Patents was right while others were wrong on scope of Epic Games v. Apple injunction as court order denying stay clarifies: NO IAP ALTERNATIVES ALLOWED, period) it would be necessary to do a follow-up to debunk the "button bull" that just doesn't go away because of one man who keeps digging himself an ever bigger hole.

Tech news website The Verge prides itself on setting a high journalistic standard with respect to "background" conversations with tech companies. I do credit them for mostly very good and in-depth coverage of app store antitrust matters. However, there comes a point when someone who claims to stand on higher moral ground just has to acknowledge he made a mistake, even at the risk of some people potentially considering it an unforgivably stupid mistake that might have led app developers to waste hours and hours of development time on code that Apple won't have to approve. The Verge's Nilay Patel prefers to raise false hopes in iOS app developers over the only honest way to deal with the situation he alone created: a mea culpa admission.

Here's a screenshot of a two-tweet thread in which the man takes a position that is squarely at odds with what the Epic v. Apple judge wrote (click on the image to enlarge; this post continues below the image): 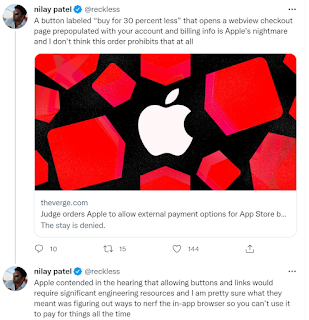 Let that sink in: he "do[es]n't think the court order prohibits [an IAP alternative that pops up in a WebView control] at all." Oh my...

I already quoted the relevant passage from this week's clarification by the court in my previous post, but let me now quote one part again with the emphasis on two occurrences of the word "external" in short sequence:

"The [Apple] Developer Agreement prohibits third party in-app purchasing systems other than Apple's IAP. The Court did not enjoin that provision but rather enjoined the prohibition to communicate external alternatives and to allow links to those external sites."

Nilay Patel's proposed approach would simply read out the word "external" from the court's clarifying statement by suggesting that developers could bring up a WebView control--meaning a browser rectangle within an app using the same browser engine as Apple's Safari browser--and automatically fill in the user's account data (such as a user ID). A control (i.e., user interface element) within an app is, however, not external.

Which part of "external" does the man not (want to) understand?

The IAP rule that the court explicitly declined to enjoin never distinguished between technical implementation strategies, meaning whether you use a WebView control or some other type of control (as long as it's the same app). Not only in theory but even in practice, one can build a whole app as just a WebView that brings up a webpage. It's like you wrap an app around the web page. The productivity app I am currently working on will in its first test version work that way.

I said test version because Apple would reject a pure WebView app for publication. Reportedly, developers have received rejection notices saying things like "We found that the experience your app provides is not sufficiently different from a web browsing experience, as it would be by incorporating native iOS functionality." The related app review guideline is 4.2 Minimum Functionality, which says among other things: "Your app should include features, content, and UI that elevate it beyond a repackaged website." But that doesn't mean that whatever a WebKit view (WebKit is the engine used by Safari and others) displays is all of a sudden "external." Apple's concern is just that there's no added value if all an app does is bring up a webpage.

Nilay Patel's tweet is wrong for another--independent--reason. As I've explained on earlier occasions, Apple could still collect a revenue cut using its gatekeeper power and claiming intellectual property rights. Developers could try to challenge the reasonableness of those terms, but that would be a whole new case.

Nilay Patel's argument has a fundamental flaw: the legal standard that Apple needs to comply with is not whether someone like @reckless could let their imagination run wild. The standard for contempt of court is such that Apple would have to rely on a wholly unreasonable interpretation of the court order. So, if developers adopted Nilay Patel's advice and submitted an app like that, Apple could reject it because a WebView inside an app is not "external" (the word he conveniently ignores). It's a user interface element of the same app. A contempt motion against Apple would fail miserably because Apple's position would be reasonable, regardless of whether someone might consider another perspective reasonable as well (or even more reasonable than Apple's).

The fact that Nilay Patel talks about whether the court order "prohibits" a certain implementation strategy for IAP alternatives is symptomatic of the bankruptcy of his argument. I'd like to give him the benefit of the doubt that Twitter-style brevity makes it hard to be 100% legally precise. But I can't because he clearly refuses to apply the correct legal standard. The court does not prohibit anything that developers do. The injunction relates to Apple, and Apple will be fine to reject app submissions as long as it doesn't interpret the injunction in ways that unreasonably disadvantage developers.

App developers need to be aware of all of that. Otherwise they're just going to waste their time and annoy Apple, and neither the district court nor the Ninth Circuit will hold Apple in contempt for rejecting what Nilay Patel suggests as a viable approach.

Let me also comment on the second tweet shown above, which is his speculation about what Apple's counsel meant when telling the court that the implementation of the court order would involve a significant engineering effort. He took that part out of context. The context is that Apple's counsel said his client wouldn't just strike an enjoined passage from its rules but would replace it with a new rule, and that new rule would involve a significant implementation effort. For example, if that new rule involved an obligation to pay Apple a commission, Apple might have to implement some kind of reporting system for payments made outside the app but for the purchase of digital goods to be consumed within the app. Whatever Apple's counsel meant, the word "external" is clear, WebView is indisputably not external, but even if one wanted to start an argument, Apple would win it because it would take a defensible position and that's all it needs so it won't be fined for contempt of court.

Suggesting otherwise is the height of irresponsibility.