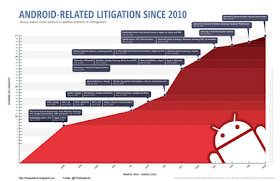 With yesterday's patent infringement suits filed by Microsoft against Barnes & Noble, Foxconn and Inventec with a US district court and the ITC, the total number of Android-related patent lawsuits has reached 37. Yes, thirty-seven. More than three dozen. Hard to believe but true.

Just to avoid misunderstandings, there are some disputes that consist of multiple lawsuits. For example, I previously published visualizations of such disputes as Apple vs. HTC/Motorola and Microsoft vs. Motorola, each of which consists of a number of suits.

Now I have -- with a little help from a friend who's good at graphics design -- created a chart that shows how lawsuits involving Android have exploded since last year. If you click on the graphic shown further above, you can see it in full size.

I have also created a PDF version that you can download from Scribd if that's your preferred format.

[Update] For sharing the infographic with others, especially via Twitter, you can furthermore use this Twitpic link. [/Update]

The infographic above leaves no doubt that Android faces more problems than any other software platform -- mobile or otherwise -- in the history of this industry. And the trend is undoubtedly that there will be even more of this before all is said and done and, hopefully, settled.

There are various reasons for all of this litigation. Let me name the most important ones.

The above list is not exhaustive, but it shows that there are reasons for the current flood of patent lawsuits related to Android -- and Google is definitely responsible for the most important ones of those reasons.

Also, Google is not simply a "victim" of patent aggressors. Just today, Google was granted a typical "troll" patent: US Patent No. 7,912,915 ("inventor": Google founder Sergey Brin) on "systems and methods for enticing users to access a web site". That's basically a patent on the idea behind the famous "Google Doodle". If you read the patent document, you can see that there's absolutely no serious innovation behind it. The patent office was apparently hesitant to grant it, but reluctantly did so after Google kept pushing for about a decade. A company that seeks to monopolize such basic ideas -- behind which there really isn't any serious technology -- apparenty loves patents. Even trivial patents (because the Google Doodle patent certainly does nothing to raise the quality of US patent grants). But Google's affection goes only to its own patents.