Nokia vs. Apple: impact analysis of ITC determination, next steps, and an updated visualization

While no platform faces as many patent infringement assertions as Android (37 Android-related patent lawsuits have been filed since March 2010), the most extensive battle between any two smartphone companies is still Nokia vs. Apple. I blogged about this dispute most recently in early January after Apple scored a procedural win.

On Friday, the Administrative Law Judge investigating Nokia's ITC complaint against Apple made a "final initial determination" according to which Apple was not found to infringe any valid Nokia patent claims. This was reported by Reuters ("Apple wins skirmish in Nokia patent war") and Bloomberg ("Apple Wins Trade Ruling in Nokia Patent Fight Over Phones").

It's important to put this into context. The "final initial determination" is not yet a final ruling; and in any event, Apple and Nokia are fighting each other in half a dozen venues of which the ITC is a particularly important one, but not the only one. There is a significant probability now that Nokia and Apple may play out a "goalless draw" at the ITC, in which case the attention will shift to the US District Court for the District of Delaware and, even sooner, to Europe. Furthermore, Apple's assertions against Nokia relate (almost entirely) to phones running the Symbian mobile operating system, but Nokia is going to increasingly bet on Windows Phone, a platform that Apple is extremely unlikely to attack. Nokia's choice of Windows Phone has probably already changed the calculus of the parties.

I have updated my battlelines chart: 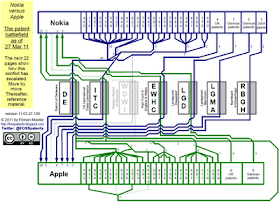 The corresponding PDF document is available on Scribd.com. It shows the 22 procedural moves that led to the current situation, and contains detailed reference lists of the lawsuits, parties, asserted patents and accused products. On Scribd you can also find a collection of documents related to the smartphone patent lawsuits.

Fortunes can change at any stage of an ITC investigation

In October I explained the role of the US International Trade Commission as a patent enforcement agency. Back then I already mentioned that USITC decisions can be appealed to the Court of Appeals for the Federal Circuit (CAFC). An appellant can request a stay of an import ban, which happened (just for an example) in a dispute between Broadcom and Qualcomm.

But even the ITC itself is not yet done with Nokia's complaint against Apple. The Administrative Law Judge (ALJ) in charge of this investigation made his "final initial determination", and he's unconvinced of any infringement of valid Nokia patent claims by Apple. By coincidence, a decision related to another dispute was announced on the same day: Kodak's complaint against Apple and BlackBerry maker Research In Motion had also failed to convince the ALJ in charge of that case, but the Commission, the ITC's highest-level decision-making body (which has six members), decided to review that "final initial determination". It may now decide in Kodak's favor, against the ALJ's determination, as Bloomberg and Reuters reported.

Until the Commission itself has decided, fortunes can change at any stage of an ITC proceeding, as I told Tech.Fortune.CNN.com in my first reaction to Friday's announcements.

This has consistently been my take regardless of who's on the supposedly winning or losing side. Five months ago, at an earlier procedural stage, there was a negative staff recommendation concerning some of Apple's claims against Nokia. At the time I also cautioned everyone that it was far from a definitive ruling.

Anything is still possible at the ITC in the three investigations involving Apple and Nokia. Nokia may still have a Kodak moment and get a review of the ALJ's determination by the Commission. Even if Nokia's complaint against Apple was dismissed definitively by the ITC, Apple's assertions against Nokia may very well suffer the same fate.

Both parties have already "lost" some of their allegations along the way:

Friday's determination related to five Nokia patents. Nokia had originally asserted seven, but it dropped two of them during the process.

Apple initially asserted nine patents against Nokia. At this stage, only five of them are still in the game. Most recently, Apple dropped a patent from its complaint. The motion for partial termination was filed on February 22, 2011, and granted on March 1, 2011. Previously, Apple had dropped three other patents asserted against Nokia.

You can find the details by clicking through the aforementioned step-by-step slideshow I uploaded to Scribd. That document also lists the asserted patents and indicates which ones were withdrawn (and when).

The five Apple patents still in the game include one patent asserted against both Nokia and HTC (the related investigation names both companies as defendants, following a consolidation decision), and four patents asserted against Nokia but not against HTC. And those four patents are the ones about which I said in the previous paragraph that the ITC staff issued a negative recommendation. So in the event the final ITC decision is consistent with the staff recommendation (which it may or may not be), and if the one patent that is asserted in the investigation that additionally involves HTC, then Apple may not obtain an import ban against Nokia either.

Should there really be a "goalless draw" at the ITC, and should the parties continue to fight each other instead of settling, then they will both try to win decisions in other fora, where it will take longer than in those ITC investigations, but not much longer.

Upcoming events and decisions in the different Apple/Nokia lawsuits

On April 18, 2011, the hearing in investigation no. 337-TA-710 (which is mostly about HTC but one remaining patent is also asserted against Nokia) will begin. The initial determination in that investigation is scheduled for August 5, 2011, and the ruling for December 6, 2011.

In the investigation that gave rise to this post -- investigation no. 337-TA-701 of a Nokia complaint against Apple -- the ALJ made his Friday determination one week ahead of schedule. When the schedule was set on May 6, 2010, the ALJ already indicated that the initial determination could be issued ahead of time, and mentioned the possibility that the final ruling could then also be moved up accordingly. For now the final ruling is scheduled for August 1, 2011, but it could now come a week earlier than that.

There are three cases in the US District Court for the District of Delaware. In each one, there are claims by Nokia and counterclaims by Apple.

One of the Delaware cases -- the second one to be filed -- contains only such claims that correspond to the parties' ITC complaints. That case was stayed for the duration of the ITC investigations. Whenever it may be resumed, it will take a while before any decision gets taken.

The original Delaware case is rather complex because it involves patents related to which Nokia had made a FRAND licensing commitment. This complexity is reflected by the fact that three different jury trials are needed to resolve that case: one on patent infringement claims, one on contract matters, and one on antitrust issues. The patent trial is scheduled to begin on May 21, 2012; the contract trial, on June 18, 2012; and the antitrust trial, on October 1, 2012.

The third Delaware case was originally filed in Western Wisconsin. If it had not been transferred, the trial would have started on January 9, 2012, but as a result of the transfer, it is virtually certain to be pushed back by at least several months. The Delaware court has not yet ordered a new schedule.

In the meantime, there will most likely be some first-instance decisions in Europe:

Dusseldorf and The Hague schedules

On September 9, 2011, the Rechtbank (Dutch court) at The Hague will hold a hearing on Nokia's complaint against Apple. While the Netherlands is a small country, it is home to Europe's largest seaport, Rotterdam. Depending on what role Rotterdam plays in Apple's European (or even worldwide) logistics, a decision there could have more or less impact. Sony recently experienced temporary problems up there.

The District Court of Dusseldorf, Germany, received complaints from both Apple and Nokia, and it decided to actually look at each of the 16 patents in a separate case. The hearings in those cases will take place between January 26, 2012, and April 17, 2012 -- still before the first Delaware trial.

Settlement: this year, next year, or even later?

It's obvious that those two large players will have to settle their dispute at some point. I believe that Nokia's decision to adopt Windows Phone should actually make this easier: there's less for Apple to gain by pursuing Symbian, and there's less for Nokia to lose.

But Nokia's CEO has ambitious plans for the monetization of his company's patent portfolio and may not give up until it gets Apple to pay.

I thought that the prospect of ITC import bans -- even though they can be appealed and stayed -- was going to put some pressure on both parties to reach an agreement. However, at this stage either one can hope that no such ban will be ordered. Things aren't looking too good for either company's ITC complaints. Then they may decide to wait until some decisions in Europe, and possibly until Delaware. And there could be second instances in any of those cases, which would further delay any resolution of the dispute.

For independent observers like me, this patent war is fascinating to watch. It's a clash of titans, a fight between a mobile phone pioneer and a major smartphone innovator. It pits the market leader by revenues against the market leader by units. All of this is exciting, but the two organizations should free up resources with a settlement in order to better focus on other pressing issues in this rapidly-evolving market.