Samsung pleaded unsuccessfully against Apple's motion for preliminary injunction, will try again at hearing on August 25

I have just obtained a copy of a press release issued today by the Landgericht (district court) Düsseldorf. The court has scheduled a hearing on Apple's preliminary injunction against the Samsung Galaxy Tab 10.1 for Thursday, August 25, 2011, at 11:00 AM Central European Time. Here's the first part of the press release (click the image to enlarge it, or click here to access the full press release as a PDF file): 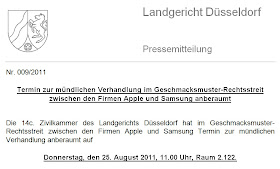 I'm going to attend the hearing in person and will report on it in due course. I have a hunch that the courtroom is going to be crowded.

The press release confirms that

In addition, the press releasecontains some useful information that I didn't have before. It doesn't bode well for Samsung, and it shows once again (after a similar attempt to mislead the public with respect to the Australian litigation) that Samsung's press releases on its dispute with Apple don't tell the whole truth:

"The request for injunction was filed with no notice to Samsung, and the order was issued without any hearing or presentation of evidence from Samsung."

While it's true that they weren't put on notice and that there wasn't any hearing, Samsung wasn't forthright enough to admit that it had filed a protective pleading. Samsung wasn't blindsided -- Samsung knew it had this coming, and the court's decision was based on both Apple's motion and Samsung's pre-emptive opposition pleading. This kind of communication strategy on Samsung's part is old-school spin doctoring and only serves to strengthen my impression that Samsung is in a legally weak position against Apple. If Samsung wants to inspire confidence, it has to understand that half the truth is sometimes tantamount to a whole lie.

The press release says that Samsung's protective pleading made the following two arguments:

After the injunction was issued Samsung filed its opposition. The court's press release says that Samsung plans to provide a more detailed opposition brief until the hearing on August 25.

Given that Samsung already failed with its protective pleading, its lawyers will now have to come up with some new arguments to have the motion lifted. Usually such hearings only lead to a different outcome if the defendant can prove that the plaintiff's representations were factually wrong, which I doubt in this case. It's far more likely that the district court is just going to affirm its decision, and in that case, Samsung will probably try to appeal the preliminary injunction to the second-instance court (Oberlandesgericht Düsseldorf). In parallel, the first-instance court will continue with the main proceeding, which will probably take about a year.