What does JAY-tech have in common with Samsung and Motorola but not (to the best of my knowledge) with LG, SonyEricsson and Acer?

All six companies I named make Android-based devices. But only the first three are being sued by Apple in Europe over design-related rights that their Android tablets allegedly infringe.

There's also something going on in Europe between Apple and HTC, but I don't have an update on that dispute today -- and I'm not aware of any design-related assertions between those two companies.

So now that the dust has settled in Europe, here are some interesting news and statements concerning Apple's European battles with Samsung, Motorola, and that increasingly famous company named JAY-tech.

The leading European consumer electronics retail chain, MediaMarkt, has already advertised a special price promotion for the Galaxy Tab 10.1 (priced at 469 euros) for this coming Saturday, August 13, 2011 (click to enlarge): 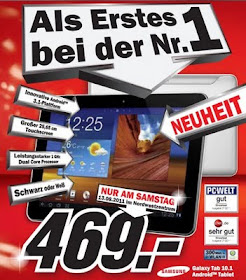 Today's edition of the Financial Times Deutschland quotes a spokeswoman of Media-Saturn, the holding company of all MediaMarkt stores, as saying that "the Galaxy Tab 10.1 is currently on sale as usual".

I'm not surprised. Apple's preliminary injunction bars Samsung from shipping the product to German customers, and from promoting it in Germany. But it doesn't have to be respected by legal entities that are independent from Samsung.

If Apple wanted to take the product off the shelves, it could theoretically request preliminary injunctions against retailers that have already received shipments. They would go to the same court, which has already looked at the issue, and just name some additional defendants who should be enjoined. However, those same resellers are usually also major Apple customers, which is probably why they don't do that.

Today was the second day of a two-day hearing at a court in The Hague, Netherlands, on Apple's request for a preliminary injunction against Samsung in that country. Apple's German complaint asked for (and resulted in) an EU-wide injunction with the explicit exception of the Netherlands. That's not because that country wouldn't have recognized the ruling. As I suspected, it turned out that Apple actually brings even broader allegations in that particular country. It's possible that Europe's biggest seaport, Rotterdam, plays a particularly important role to Samsung's European logistics.

As Reuters reported, the judge told Apple that he would have to think long and hard before issuing an injunction. The decision will be taken by September 15, and in the event that an injunction is ordered, it will take effect four weeks later (October 13, which happens to be the date on which there will be a court hearing in California on Apple's request for a preliminary injunction against Samsung in the U.S. market.

On both days of the hearing, Webwereld.nl editor Andreas Udo de Haes tweeted from the courtroom. Here's a link to his Twitter profile -- usually he tweets in Dutch, but by popular request he tweeted in English during most of the day today.

As Andreas Udo reported, Apple's Dutch complaint related to not only the Community design asserted in the Düsseldorf case but also three technical patents:

Those three patents show once more that it's popular misbelief that software isn't patentable in Europe. While all of those patents also reference hardware components in their claims, none of them relates to any new hardware. All of the innovation in those patents -- like in tens of thousands of other European patents -- is on the software side. There will definitely be many more European lawsuits over allegations of patent infringement by wireless devices, and software patents will be at issue in many of those disputes.

Motorola issued a statement, quoted in the media, on Apple's German lawsuit over the design of the Xoom tablet. According to that statement, Motorola sued Apple in Germany in April, and Apple responded with different claims, including patents as well as design-related rights. The Xoom-related filing was made on May 27, 2011, according to Motorola's representations.

If Apple had requested a preliminary injunction, there would have been a decision a while ago.

Many were surprised to find out that Apple sued such a small company as JAY-tech over an Android-based tablet. Apple has that famous history of having started as a "garage company". Now it sues small companies. Figuratively speaking, JAY-tech is also a garage company, though its website indicates it has a real office.

Financial Times Deutschland quotes Lothar Knobel -- JAY-tech's Steve Jobs -- as claiming that Apple sues small companies to strengthen its legal case for its battles with larger players. Mr. Knobel said that "in light of Apple's market power and financial strength, we are probably one of only a few small companies to defend ourselves".

According to the FTD article, the injunction against JAY-tech was handed a few weeks ago. JAY-tech now tries to get Apple's Community design invalidated. Interestingly, Apple's preliminary injunction against Samsung has resulted in quite some debate in the German blogosphere -- especially among lawyers, some of whom believe that the decision taken by the Düsseldorf district court against Samsung was "erroneous". Should JAY-tech indeed achieve to have Apple's iPad-related Community design invalidated, then Samsung will also win its case. Quite probably, Samsung's and JAY-tech's lawyers are going to cooperate to a certain degree as far as the possible invalidation of Apple's Community design is concerned.