UK judge who issued extreme ruling for Samsung against Apple hired by... Samsung!

By far and away the weirdest ruling in the worldwide smartphone and tablet wars came down last year in the UK, where a publicity order forcing Apple to promote Samsung's products and to make itself ridiculous in public was upheld by an appeals court, and where Apple's efforts to comply with the order were deemed "false and misleading". I thought Apple was being treated way too harshly because in the end it was just trying to defend its intellectual property rights in court and merely had refused to withdraw a German lawsuit after a UK ruling by a lower court.

The judge who gave the first opinion for the appeals court (as you can see at the start of the published decision) was The Rt. Hon. Professor Sir Robin Jacob. As Wikipedia explains, he "retired from the Court of Appeal in March 2011" to become a professor, but under Section 9 of the Senior Courts Act 1981, ex-judges can still be invited to sit on the bench. On that basis, Sir Robin Jacob handled the Samsung v. Apple case that made headline news around the world because it appeared that Apple filed frivolous lawsuits (which is not true). In a ruling on Apple's first attempt to comply with the publicity order, Sir Robin Jacob even noted a "lack of integrity".

For someone so concerned with "integrity" it is utterly unusual to issue a high-profile and extreme ruling in favor of a particular party (Samsung in this case) only to be hired as an expert by that same party in another dispute. But that's what has happened here, and I wonder how certain people in Cupertino feel about it. Yesterday Samsung's counsel in the ITC investigation of Ericsson's complaint submitted the protective order subscriptions (covenants to comply with the ITC's strict confidentiality rules) of nine "experts [...] working on behalf of Respondents Samsung Electronics Co. Ltd., Samsung Electronics America, Inc., and Samsung Telecommunications America LLC". Lo and behold, Sir Robin Jacob is one of them. Here's the main part of the letter (click on the image to enlarge or read the text below the image; I underlined his name): 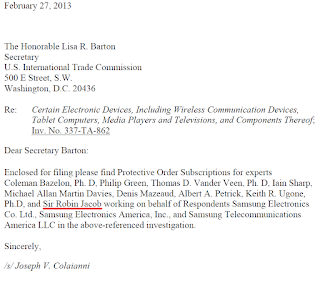 I'm sure that Samsung and Sir Robin Jacob wouldn't be doing this if there was any risk of this conduct violating the law. Apparently an ex-judge who is invited to rule on a case involving a given party is not barred by existing UK rules (though this case here may spark a debate over whether some reform is needed) from being hired by the same party in another litigation outside the UK less than four months later.

I also have no doubt that at the time of the ruling Sir Robin Jacob was not being paid, or improperly promised to be paid, by Samsung, and he won't have had any contact with Samsung or Samsung's counsel that would have been against the rules and barred him from adjudicating the Samsung v. Apple case.

Furtermore, Sir Robin Jacob is truly an expert in patent law and there is no question that Samsung will benefit from his knowledge.

That said, this just doesn't feel right. It gives the impression that a judge who deals Samsung's number one rival a huge PR blow, in a way that I found very extreme and unjustified, will be generously rewarded. For that reason alone, I think both Samsung and Sir Robin Jacob should not have done this. What would people say if Judge Lucy Koh, a few months after denying Apple a permanent injunction against Samsung, returned to private practice and was hired as an "expert" by Samsung in a German litigation with Ericsson? I guess there are written or at least unwritten rules in the United States that would prevent this from happening in the first place. In the UK it appears to be above board and accepted.