Of the five Nokia patents that prompted Google's intervention in the ITC investigation of the Finnish company's patent infringement complaint against HTC, four have been dropped, which speaks to HTC and Google's defensive strength. There are also three other patents in play that Google isn't interest in, but the one patent due to which Google is still active in this case is of exceptional importance: U.S. Patent No. 5,884,190 on a "method for making a data transmission connection from a computer to a mobile communication network for transmission of analog and/or digital signals", which covers tethering, has already been interpreted by an ITC judge consistently with Nokia's suggestions, substantially increasing the likelihood of an infringement finding. That claim construction ruling drew my attention to this particular patent. I was reading the decision on a train back from Mannheim, where I attended another Nokia patent trial that day, and I immediately felt that this patent was going to be the most important one at least in this ITC investigation and possibly also in the whole Nokia-HTC dispute spanning three countries (US, UK, Germany). Here's a drawing from the patent document: 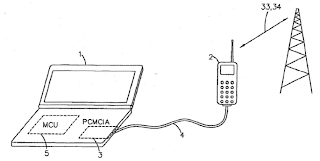 Yesterday Google brought a motion for limine with a view to the upcoming evidentiary hearing (ITC trial) that focuses on the tethering patent. Even though Google (i) proudly demonstrated tethering as an Android feature a couple of years ago, (ii) discusses it as an Android feature on its support website, and (iii) would no longer be an intervenor in this investigation if not for this patent, Google doesn't want the ITC to make a finding that "Android" infringes. Google doesn't "want" HTC to be found to infringe either, but from Google's vantage point that would be the lesser evil than an infringement finding relating to Android in general. An import ban would still be limited to HTC's devices, but other Android device makers also need a license to some of Nokia's non-standard-essential patents.

This is the objective of Google's motion:

"Google [...] moves to strike and exclude Nokia's proposed expert, Theodore Rappaport, from providing testimony or offering any opinions relating to: 1) Google's Android operating system or any Google application, software or products/services, and whether it allegedly satisfies any portion(s) of asserted claim 1 of U.S. Patent No. 5,884,190 ('the '190 patent'); and 2) on what constitutes prior art to the '190 patent.

Whether this particular expert will be allowed to testify on Android's alleged infringement is going to depend on what was said by when and whom in this particular ITC investigation. But in practical terms, if HTC's Android-based devices are found to infringe this tethering patent, Google's Android ecosystem as a whole is going to have a problem. Based on the scope of the asserted claim 1 and the claim construction based on which the ITC judge is now going to determine infringement, I can't see why HTC's tethering would infringe and, for example, Samsung's (since this is the market leader and also the Android device maker whose tethering feature I use very frequently) would not.